Ron was born 1st April 1924 as the youngest of 7 siblings. This phase of his life is covered in 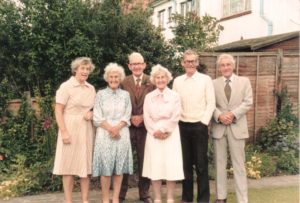 Due to his age at the time war broke out Ron was evacuated to Belper.  When he became eligible for service he joined the Royal Air Force as an armourer and took further training. Here he worked on ammunition for Bristol Beaufighter aircraft and somehow picked up the unusual skill of being able to dismantle and reassemble riles blindfold (thankfully this appears to have been more of a personal challenge rather than an MOD requirement).

Upon finding himself posted to a air base in Scotland where there were far more skilled armourers than there was work for them to do he asked for a transfer to an intelligence gathering unit he had heard of where he felt he could be of more use.  Probably due to his initiative and audacity as much as for anything else, he was duly accepted. He was taught Japanese at the School of Oriental Studies, London and went onto to learn the arts of code breaking and intel gathering at RAF Chicksands and Bletchley Park before being shipped of to Malaysia & Burma to intercept Japanese air command signals behind enemy lines. His war record should hopefully become de-classified shortly so I should be able to update this with some more relevant history soon.

After the war and a demob phase in Mangalore, India Ron made his way back to to the UK and first secured a job in a Quantity Surveyor’s before moving into insurance risk surveying for the  Westminster Fire Office, then a small independent specialist insurer in Covent garden.  Upon joining a tennis club he met Gwendolen Alice Harvey of the well known old Leigh family of that name and they married in July 1950.

Following a number of takeovers the Westminister Fire Office became part of the Sun Alliance / More Than insurance group and Ron stayed working for them. Ron and Gwen had a pleasant married life and Chris came along in 1962.  Following a long held ambition Ron studied with the University of London, obtaining a BA Hons in history.  In his late 50 s Ron took the option to retire early and enjoyed a pleasant  retirement with Gwen. 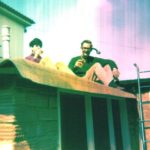 Aside from walking and visiting National Trust properties Ron had acute interests in classical music, architecture, politics, literature, poetry and the fine arts. Perhaps unsurprising for the son of a master builder Ron was quite keen at DIY and carried out all manner of jobs on his house. An attempt to clear a gutter on a frosty day resulted in a 2 storey fall and compound fractures to both wrists requiring plaster casts for several weeks but it didnt put him off. He was a keen supporter of a number of charities including Guide Dogs for the blind, Essex Air ambulance and CCHF which provides holidays for underprivileged children. Ron was a super grandad to his 3 grandchildren, regularly collecting them from school, coking for them and introducing them to his many hobbies.

Sadly Gwen died rather suddenly just 2 weeks before what would have been their Golden Wedding anniversary in the year 2000. Though a bitter blow which Ron never entirely recovered from he responded by throwing himself into a number of hobbies including the local National Trust group and two ramblers groups.  Rather than a dinner for his 80th birthday Ron decided to walk Hadrian’s wall, Ron’s account of which is elsewhere on this website, aided and abetted by Keith Harknett, husband of his niece Phillipa.

Ron’s sight declined in his mid to late 80’s which made it difficult for him to read but with the help of large print train and bus timetables he was still able to travel independently for some time and  continued to play an active part in the family.  He could no longer see the birds in his garden – but he could still see the foxes and he became just as interested in their habits and lives as he had in the visiting robins and sparrows.

At his 90 th birthday Ron regretted not being able to walk the distances he had a decade earlier but consoled himself with throwing a big party, much of which I’m proud to reveal Ron organised himself despite Alzheimer’s having begun to noticeably encroach on his faculties. 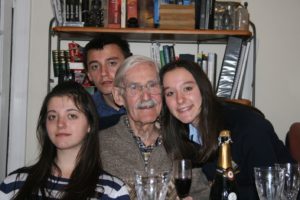 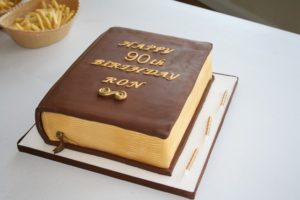 In his dwindling years Ron was very lucky to have been cared for by Neill Morfitt, an extremely kindly person who had given up paid work as a mechanic to look after his own mother who became bed ridden. Following the death of his mother Neill agreed to care for Ron, something he did stalwartly until Ron’s recent death.